“The Company was not able to reach Mr. Liu.”
BTBT euphemism to describe the jailing of their board member and controlling shareholder
Initiation Report: January, 11 2021 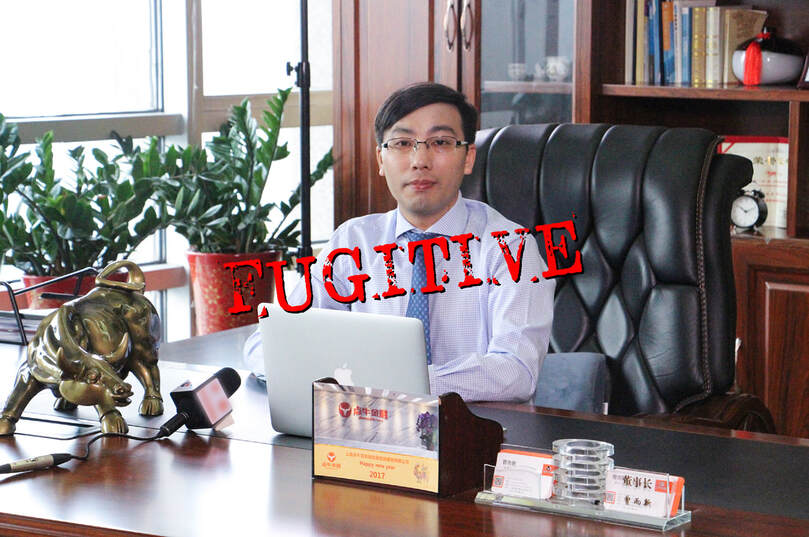 Former Chairman and CEO Zeng Erxin, now being sought by Chinese police.
With key executives in jail or on the lam for having bilked Chinese investors out of $42 mln in a fraudulent P2P business, Bit Digital (BTBT) has moved on to a fake crypto currency business. We will show that the assets probably do not exist, and the business is designed to steal funds from investors.

BTBT tried to downplay the criminality. It disclosed that it had to replace Director Liu Xiaohui in September 2020 because “the Company was not able to reach Mr. Liu.” That is because, as BTBT knew, Liu was in jail. It reported that the then-CFO, Leng Jing, also in jail, was “the subject of [such] criminal enforcement measures.” The VIE bank accounts were frozen by a Shanghai court and remain frozen to this day.

Once police had shut down its business, BTBT tried to distance itself by selling the China operations, for $10 plus “other good and valuable consideration.” Actually, BTBT likely has liability for the $42 mln lost through fraud.

BTBT is now onto its third scheme since IPO for stealing money from investors. There was P2P, car rental, and now “bitcoin mining.” The company reported at end Q3 2020 that it was operating 22,869 bitcoin miners in China, but that is simply a lie. With no subsidiary in China, that would be illegal and the machines subject to confiscation. What’s more, we verified with local governments supposedly hosting the BTBT mining operation that there are no bitcoin miners there. We also confirmed that BTBT has not bought new miners—the companies it says sold them the machines deny ever having done business with BTBT. We think the company has simply stolen the $19.8 mln it claims to have spent on miners in the first nine months of 2020. Perhaps to avoid detection, the company modified its disclosures to provide only the names of huge provinces where they are supposedly mining bitcoin, deleting the names of towns.

To operate this sham bitcoin business, BTBT acquired a Hong Kong company called XMAX and employed one of its founders, Yu Hong, without disclosing his relationship. When they made the acquisition, the BTBT CFO, Huang Erke, was already an XMAX director. Multiple stories in the Hong Kong and U.S. press indicate that XMAX is a fraud, as is its crypto currency, XMX.

XMAX was reported to have halted its mining operations last May and had its miners confiscated in China. A November 23, 2020 article in The Paper reads: “In May 2020, Yu Hong announced that, due to the impact of the macro economy and the halving of Bitcoin production, all mining machines were suspended and the repurchase plan [of XMAX’s crypto currency, XMX] was suspended. Yu Hong revealed on Weibo on June 1 that the mining was suspended because the XMX mining machines in Lanzhou mine were confiscated and a lawsuit was being filed.”

Before the P2P business, BTBT claimed it was in car rentals. All it did was book deposits for cars then write them off, magically making cash disappear.

The BTBT gatekeepers are the lowest of the low, starting with the underwriter, Viewtrade, whose underwriting clients have seen their share prices drop by at least 90% on average--when they haven’t been delisted.

The company has had three strip-mall auditors resign in three years. One of them, Wei & Wei, stayed for just nine months and did not sign any of the statements.
​
The executives who still secretly control the company are in jail or are fugitives from the law. We will show that the people appointed to replace the jailed executives—a CEO with a junior-high education who managed a wholesale market and a hair-growth clinic and a CFO with no accounting background—are mere proxies for the jailed owners. In fact, the company disclosed that the jailed CEO and fugitive chairman “have, and will continue to have, substantial influence over our business.”
This team not only stole from investors in Shanghai, but they even diverted cash into their personal bank accounts. Chinese legal cases against them allege that they diverted at least ¥2.5 into personal bank accounts. This is documented in numerous cases filed in Shanghai

And yet these are the executives U.S. investors are being asked to believe run the biggest pureplay bitcoin mining operation now listed on a public market.
Read our report
J Capital Research ("J Cap") is a stock-research company. J Cap has analyzed the U.S.-listed company Bit Digital, Inc ("BTBT") and is hereby publishing the outcome and the conclusions of our analysis, based on publicly available information. We may be short shares of BTBT and, for this reason, there might be a conflict of interest.