Be warned. We are activists, usually on the short side. We are biased.
We do our best to find and present facts, based on extensive primary research and using public sources.
​But we will profit if these stocks decline or, when we are long, rise in value.
We do not offer advice on how to trade a stock. We present our views.
You must agree to our Terms of Service

Don't feel like reading? Watch our summary on Zer0es TV
We don't think Faraday Future (FFIE), an EV SPAC, will ever sell a car. So far, it's nothing but a bucket to collect money from U.S. investors and pour it into the black hole of debt created by its founder, China's best-known securities fraudster, Jia Yueting.

After eight years in business, FFIE has failed to deliver a car and is yet again saying “next year.” The company has reneged on promises to build factories in five localities in the U.S. and China and repeatedly delayed the sixth. FFIE is being sued by dozens of unpaid suppliers and has failed to disclose that assets in China have been frozen by courts. And Jia appears to be running the company behind the scenes.

Given the current bubble environment, FFIE nevertheless managed to raise about $1 bln from U.S. investors via PIPEs and SPAC merger in July. Now it promises to restart its abandoned factory in Hanford, California and mass-produce cars in just seven months. We doubt that timeline will hold: three recent visits to the factory showed little activity, and company formers told us there are still engineering problems to work out.

FFIE is the malformed lovechild of the imperiled Chinese real estate developer Evergrande (3333 HK) and Jia, China’s fugitive default king. We expect Evergrande, which owns 20.5% of this company and stands to gain more equity, to sell off its shares as soon as the lockup period ends, in January 2022 if not, quietly, before that.

In January 2021, the company claimed it had 14,000 reservations for the car—until one week after Hindenburg published its findings that Lordstown’s orders were faked. Without explanation, after March 19, FFIE no longer made reference to the number of reservations. In fact, these reservations--78% of which were from a single company—had been converted in 2020 to a note payable earning 8% interest. The company strongly implies that the mystery booker, who was apparently ready to spend well over $1 bln on FFIE cars, may be an “affiliate.” They fail to say who it was. In H1 2021, despite the upcoming SPAC merger, FFIE took in just $144,000 in new customer deposits.

Massive dilution is coming down the pike. Legacy FF shareholders will receive up to 25 mln FFIE shares based on a limited upward movement in FFIE’s share price alone. Over half of those shares are earmarked for Evergrande. SPAC sponsor PSAC had 23.7 mln warrants as of June.

Just last August, despite having very recently raised a significant amount of cash, FFIE continued to issue promissory notes convertible to 4.4 mln new shares with a conversion value equivalent to 130% of the outstanding principal. In an S-1/A just issued on October 4, FFIE showed that it is still raising money, with some of the new debt costing 14%.

Adding insult to injury, FFIE’s own filings state deep in the small print that it expects to need an additional $1.4 bln in funding by 2024 to achieve its financial targets. That is likely to dilute equity holders.

Meanwhile, FFIE may soon move U.S. investor money into private hands. The pro forma combined balance sheet shows $127.8 mln in notes payable remaining on the accounts after the SPAC merger and PIPE. Jia and other related parties already cashed out $68.7 mln “in conjunction with the closing” of the SPAC merger on July 21, 2021.5 We don’t doubt he needs it—Jia at one time claimed $6.6 bln in personal debt.

On September 20, 2021, the company issued a new presentation claiming progress toward manufacturing. But former engineering executives we interviewed did not believe that the car was ready for production. FFIE’s contention that it needed just $90 mln to start mass production in seven months is “not even in the ballpark of true,” said one formerly highly placed executive. Another former executive said, “The story with the SPAC is that they just needed money to manufacture, but I think there are still some critical engineering issues.”

Chinese government reports show that in 2016, FFIE’s subsidiary LeSee put $154 mln into the company’s largest planned manufacturing site, in China’s Zhejiang Province, but we visited the location and found nothing but an overgrown field. The area is so deserted that even the police station in what was intended to be the Faraday factory park has closed.

Jia Yueting, FFIE founder, has been banned for life from being associated with publicly listed companies in China. FFIE admits in its “risks” section that he has “illegally” provided funding and guarantees to affiliated companies, improperly diverted proceeds from the public offering of a company he controlled, and lied to Chinese regulators and investors. In Hong Kong, where he was chairman of the long-halted Coolpad Group Limited (2369 HK), he failed to disclose key transactions.

Holding the title “Partner, Chief Product & User 5 October 7, 2021 Ecosystem Officer,” Jia still controls key spending decisions at FFIE through the FF Global Executive Committee. Because of him, FFIE’s USD accounts in China have been frozen by regulators. In a lawsuit against FFIE, the company’s former General Counsel Hong Liu claimed that a Jia “clique” controlled the company regardless of legal commitments.
Embarrassed by Jia, FFIE hired a “professional” CEO in September 2019, but his track record in Chinese EVs is not much better. Carsten Breitfeld was co-founder of Nanjing-based Byton, which owed suppliers and employees millions of dollars when it stopped operating in 2020. He conveniently omits from his bio in the prospectus his ill-fated tenure as CEO of another Chinese EV hopeful called Iconiq, which raised over ¥1.2 bln before going silent.12 He gets tepid reviews from formers.

In the current overheated EV environment, the company appears to be having difficulty finding talent. In September, FFIE announced new executives: one from Lordstown—the company an FFIE former said “is setting new standards for fraud”--and two from Karma, a moribund company that the auto news site Jalopnik claims may have faked prototypes. One of the Karma graduates is an ex-vice president of A123 Systems, a formerly U.S.-listed Chinese company that has been sued multiple times for patent infringement and securities fraud.

There is a long list of investors looking to dump shares, from 20.5% holder China Evergrande, to the legacy company FF Global Partners, with 37.4%, to equitized suppliers, who are 6.1% of the float. Some of those holders—two-thirds of the shares in the Vendor Trust and an unspecified number of the shares owned by FF Global Partners—are already eligible for sale.

The August registration statement indicated that $495.7 mln in liabilities were converted to fully vested shares at the SPAC closing, including $109.6 mln from vendor payables in trust subject to between 30-90 days’ lockup. We expect these holders, most of whom have been unpaid for at least two years, to sell down fast. The entire lock-up for the vendors ends October 20, 2021.

FFIE has burned pretty much everyone who has worked with or invested in the company, save insiders like Jia. FFIE has defaulted on debts to suppliers even when it didn’t have to—some of the lawsuits seeking unpaid fees are for a few hundred thousand dollars. The company has repeatedly reneged on promises to build factories in both the U.S. and China. Its own former general counsel has sued FFIE for unpaid compensation and claims that management broke U.S. laws and acted as a “visa farm” for Chinese nationals.
​
A former executive of the company told us: “I wouldn’t trust Faraday with a dime. If a year ago, someone had contacted all the employee/shareholders and told us we could sell at 2 cents a share, we would have jumped at the opportunity.”
FFIE is just a stream of grandiose announcements that are soon replaced by new hype. We think FFIE is a zero.
Submit a research idea
Join our complimentary list 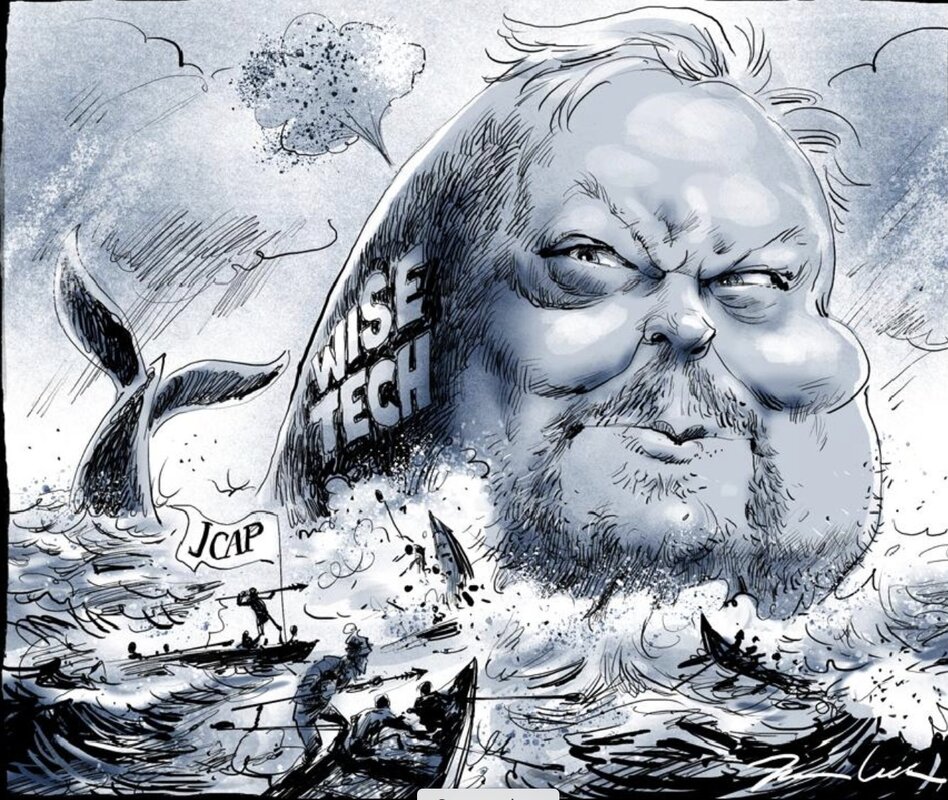 ​Cartoon by Johannes Leak
Wisetech Report
Disclaimer
The reports and other commentary displayed are for information purposes only and should not be relied upon as investment advice. The information provided is not a complete analysis of every material fact regarding any country, region, or market. Because market and economic conditions are subject to change, comments, opinions and analyses are rendered as of the date of this posting and may change without notice.

Opinions are intended to provide insight on macroeconomic issues and commentary is not intended as individual investment advice or a recommendation or solicitation to buy, sell or hold any security or to adopt any investment strategy.

Investments involve risk. The value of investments can go down as well as up, and investors may not get back the full amount invested. The information contained in these reports has not been reviewed in the light of your personal financial circumstances. Reliance upon the information is at your sole discretion.