A closer look at CDXC’s “positive” Phase 3 trial news yesterday reveals some troubling facts.
The study, conducted in Turkey, was very narrow, focused on young people without co-morbidities, whose likelihood of rapid recovery from Covid19 is high.
​
Furthermore, CDXC had already touted this news in a press release on February 24.

The Phase 3 trial that CDXC touted on Monday[1] was conducted at a single site in Istanbul among 304 patients with a mean age of 36 and without co-morbidities. The Phase 2 trial had been conducted with 93 patients. According to the FDA. A typical Phase 3 trial is for 300-3,000 subjects and is conducted over 1-4 years.[2]

The published study reports that it was supported by a grant from the Knut and Alice Wallenberg Foundation in Sweden and “in partnership with” CDXC.[3]

FDA and FTC violationsThe “good news” about the alleged effects of a Tru Niagen component on Covid19 could get CDXC into more hot water with the U.S. government. CDXC has already been cautioned by the Food and Drug Administration and the Federal Trade Commission in relation to promotional statements. The agencies issued warning letters in November 2020 and April 2021 instructing CDXC to stop telling the public that Tru Niagen has benefits for fighting Covid.

The letter went on to criticize CDXC for claiming without basis that:
Your Tru Niagen products are labeled to contain nicotinamide riboside (NR). On your websites, you claim that these products increase levels of nicotinamide adenine dinucleotide (which you abbreviate as “NAD” or “NAD+”).[5] Claims on your websites also suggest that depletion of NAD/NAD+ worsens COVID-19 and that increasing NAD/NAD+ levels—including through NR supplementation—is safe and/or effective for the treatment or prevention of COVID-19.

The FDA gave CDXC 48 hours to remove the promotional statements. Yet CDXC received another warning letter in April. The contents of this letter have not been disclosed. But the FDA told CDXC that it would update its website as soon as CDXC addressed the problem.

The website as of June 28 had not been updated. 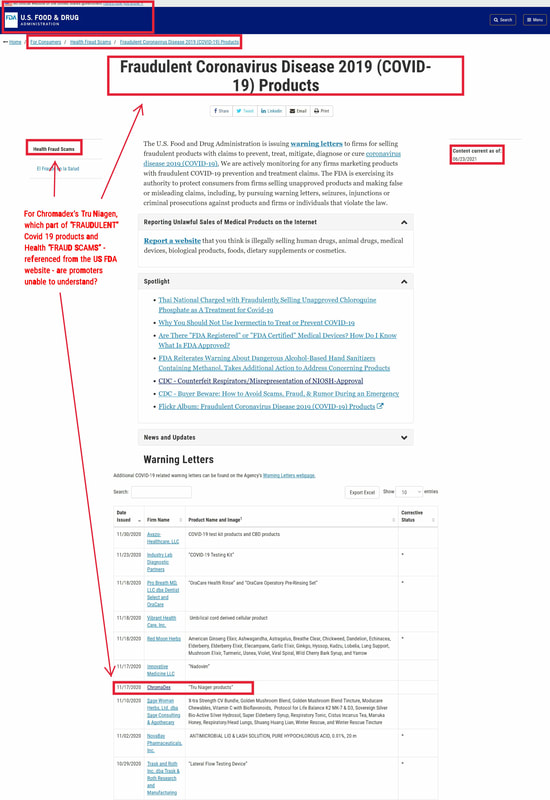 Update
[1] https://onlinelibrary.wiley.com/doi/10.1002/advs.202101222
[2] https://www.fda.gov/patients/drug-development-process/step-3-clinical-research
[3] https://www.kth.se/en/aktuellt/nyheter/covid-19-patients-recover-faster-with-metabolic-activator-treatment-study-shows-1.1087654
[4] https://www.fda.gov/inspections-compliance-enforcement-and-criminal-investigations/warning-letters/chromadex-607692-11172020
A Full Dose of Promotion
Initiation Report: June 24, 2021
After months of examining ChromaDex (CDXC), we have come to the conclusion that this maker of a health supplement is pure hype, dished up by an Oceans 11 of stock promoters. CDXC promotes its single product, called Tru Niagen, with iterative press releases that boost share price long enough for insider sales before the vaunted advantages contained in those press releases quietly disappear.

Key members of the team, Barry Honig, Phillip Frost, and Michael Brauser, have been targeted in a dozen lawsuits and SEC enforcement actions. Why would you trust them with CDXC?
Not only is the management team dubious, but so is the auditor. CDXC uses Marcum LLP, which the PCAOB says is riddled with deficiencies. That supervisory body has banned Marcum from conducting some audits in China—where CDXC reports substantial revenue.

The latest promote is a Walmart distribution deal, announced twice, in March and in June, for full effect. Should investors be in doubt about whether this will mean anything, a deal involving Walmart came and went in 2016, when CDXC said that a product containing Niagen would be distributed in Walmart.

The company frequently announces deals that end up producing virtually no sales. A few examples:
Mysteriously, since 2016, CDXC has had a revolving credit facility with an obscure bank called Western Alliance, received via a consulting arrangement for which it paid Trump Securities LLC and Credo 180 LLC $100,000 in fees. The mystery is why CDXC has repeatedly renewed this credit agreement without drawing down the loan. Trump Securities appears not to be connected with Donald Trump, although Trump Securities has directed funds to former Trump advisor Anthony Scaramucci.

Virtually every distribution announcement contains more hype than substance. CDXC issued two virtually identical announcements, March 10 and June 7, announcing that the company’s single product, Tru Niagen, would be sold in about 80% of the Walmart stores in the U.S. We spoke with and visited seven Walmart stores in different states. Four carried a Tru Niagen 100 mg tablet, 30 count, for $19.97, meaning a 10-day supply at the recommended dose. Based on the slew of disappointing results from previous deals, we believe that the Walmart agreement—shamelessly announced twice—may similarly turn up empty. CDXC shares popped on both announcements, 14% on March 10 and 7% on June 7. Director Stephen Block profited from the first bump, selling 52,500 shares on March 16.

CDXC not only hypes its distribution deals—the company has been warned by the FDA and twice by the FTC to stop making claims that Tru Niagen helps combat Covid19. The first letter said: "The FDA has observed that . . . [Tru Niagen] products are intended to mitigate, prevent, treat, diagnose, or cure COVID-19." The letter called the products "unapproved new drugs" and "misbranded drugs."

After reviewing the company’s reported acquisitions and dispositions since 2012, we believe they have provided negative real value to shareholders but payoff to insiders. We will describe three of these self-serving deals in detail below. Here is a summary:
We believe CDXC is a loss-making value destroyer that has a very simple business model and product line and can’t turn a profit. The company has been selling its version of the chemical nicotinamide riboside (NR) to health supplement companies since 2013 and to consumers, as TruNiagen, since 2017. Yet CDXC has experienced losses and negative operating cash flows every year since at least 2009, sustained by a series of equity-related offerings. How long does it take to make a profit from a supplement priced at $85 a bottle for a month's supply at recommended daily amounts, a price well in excess of that of similar products readily available?
​
This report is opinion based upon public materials, which are referenced in links. All comments are based on such public materials unless specifically stated otherwise.
Read our report
J Capital Research ("J Cap") is a stock-research company. J Cap has analyzed the U.S.-listed company ChromaDex Corporation ("CDXC") and is hereby publishing the outcome and the conclusions of our analysis, based on publicly available information. We may be short shares of CDXC and, for this reason, there might be a conflict of interest.